Apparently, this morning at daybreak, metro Detroit was colder than the South Pole by about six degrees Fahrenheit.  It is admittedly summer down there currently, but it is also Antarctica. We got back from Colorado and the Rockies on Saturday night, and thus went directly from feet of mountain snow to Michigan’s toughest version of a blizzard and these days of subzero temperatures. I am delighted. There are piles of snow, my hair is always freezing and turning into that cool crunchy texture, and I get to wear my new hat all the time.

So Colorado! It was basically my idea of heaven; and if everything I believe is wrong and there is some kind of life after death and I get to go there because I am a nice person, I would not mind at all if it were just like this. Every day went something like: waking up, for some unknown reason, at an ungodly early hour; spending the day outside in the mountains, skiing or hiking, and getting thoroughly exhausted; coming home to peel off the wet wooly layers, change into bathing suits, and drink PBRs in the hot tub; eating an enormous and hearty homecooked dinner as a boisterous group (people scattered around chairs and couches and crosslegged on the rug); and spending the rest of the night drinking bourbon or tequila-with-snow, dancing in giddy circles, running around in snowpiles, playing games, making toasts and telling each other how awesome we think we all are, and climbing on things until everyone falls asleep in cozy piles wherever they can find some square footage and a blanket. 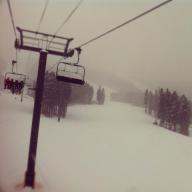 Right? How great does that sound?

I drove down there (over there) with a group of five others; friends of Mel’s, who have become, over the years and certainly after spending 43 hours in a car together, friends of mine. These are some good people – goofy, adventurous, outgoing, caring, and, as my brother put it on our last night, people I don’t feel bad about reverting to childhood in front of. We drove all day and all night, playing games of trivia and Catchphrase and mad libs, and stopped at such classics as the World’s Largest Truck Stop (I got to sit in a semi and we met a dude trucking ‘salmon slurry’) and a fast food joint called “King Kong” which featured stuffed animals hanging from the ceiling and a dish called the “Super Kong” which was four burger patties on a single bun. Put everybody in a good mood, for sure. 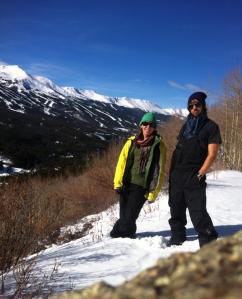 I spent the first night and day with my brother in Boulder. (Everybody knows that my brother is just about the greatest person ever, right? It was pure magic to get to spend so much time with him. We spend about 75% of the time just laughing hysterically about silly stuff; but he also, in between, makes me feel wholly optimistic about life in a more serious way.) He lives in a beautiful house near the UC Boulder campus, and there’s a cute dog there named Chinle, who snores. Brother and I had a walk and also made a shot ski (great arts and crafts project. I didn’t even get epoxy all over my fingers.)

We then got to drive his new and immensely badass pickup truck through the mountains to Breck. As we arrived, the whole crew, who’d apparently been drinking for hours, were just heading to this place called Cecilia’s; if you happen to be from Michigan or State, you’d recognize it as a sort of mountain version of Rick’s, and thus not usually a place you show up to sober, if you know what I mean. But it was nearly empty, and we drank PBRs and whiskey gingers, and our whole party danced in a giant circle and it was like we had the whole place to ourselves (except for random dudes who kept trying to infiltrate, and at one point bought us a free round of shots of something appley-flavored.)

So thus it began – and then we moved into the rest of the week, the skiing and hot tubs and dinners and dancing, and everyone staying at Mel’s, which is a place not exactly designed to sleep thirteen, but it managed. Her roommates are champs for putting up with this locust swarm of Michiganders; but then, her roommates are just champs in general. They’re more goofy and outgoing and caring people, and also wore animal-themed onesies much of the time. 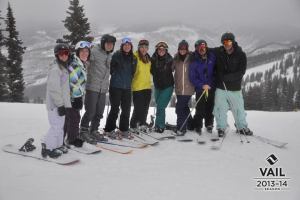 We skied at Vail, and in fresh pow at Breck, and my brother and I hiked Boreas Pass and met a badass old man cross-country skiing hooked up to an oxygen tank. And at midnight, on New Years Eve, a circle of us (including our friend Mike, who happily joined for NYE) congregated in the snowy drive under the stars and cheered and danced, as we passed around a bottle of champagne and music poured out of my brother’s truck. I hope all of 2014 is full of as much exuberance.

In the midst of winter, I found there was, within me, an invincible summer. (Albert Camus)

‘I miss you, friend,’ she said, and she pressed the palm of her hand to the rough bark of a tree, hoping somehow to send the message, as a small burst of kindness and support, through the trunk and down the roots and through the soil many hundreds of miles to its unknowing intended recipient.’Friendship through trees, til we meet again.’

#blackouttuesday ideas of where to donate in addition to your black square: Black Visions Collective and Reclaim the Block in MN; your local bail fund for protestors or your local BLM chapter.
Challenge: can you find me amongst our crazy yard ferns?!? #sewardmpls #minneapolis #ferns #onlyinmn #wherethelizferngrows @claire_varga
#studiotothestreets @mactiririshdance #irishstepdance #gooutside #soundon
I love a good fungi log. #shelffungus #onlyinmn #springtime #gooutside
Spring comes slowly, and then all at once. (Misquoting Hemingway, Twain, Fitzgerald, AND John Green because apparently they were all ripping off one another. It’s a good phrase.) #onlyinmn #mississippiriver #bluesandgreens #minneapolis #gooutside #adventurebang #jackinthepulpit
If I were super teeny tiny I’d want to live in a springtime moss forest by a clump of hepatica. If I was a tree, white pine wouldn’t be a bad choice. #onlyinmn #adventurebang #hepatica #easternwhitepine #moss #springtime
I saw not one but THREE birds who were each bigger than my head. (And I have a big head.) (Pileated woodpecker, white heron, blue heron, if you’re curious.) Majorly recommend hikes at Lebanon Hills. (Also saw frogs, turtles, a deer.) (And lots of humans but we kept our distance.) #adventurebang #onlyinmn #lebanonhills #springhike
I literally can’t wait to hug you. #lakecircumnavigation #lakehiawatha #onlyinmn #tinylake #socialdistancingissoimportantANDSOHARD
There’s a turtle in this picture. #adventurebang #onlyinmn #springhike #reservoirwoods
%d bloggers like this: