This is a weird time for me. For the first time in a very long time, I have no full-time job, and I’m not a full-time student, either. I am in a strange limbo. There is certainly unhappiness in my current state. For one thing, there is a real and deep missing of a faraway friend, because I don’t know how not to feel all of my emotions fully, and there it is. (At the same time, I’m grateful, for many things. All we need to say about that.)  And for another thing, I am the sort of person who thrives on busy-ness, challenge, and productivity, and it’s rather strange for me to have so much free time, and to not have a job, or my own place to live, etc. Right? Nobody likes that.

On the other hand, the job search isn’t too depressing yet – I’ve had several interviews as of late with more forthcoming, and I’ll keep you all posted as I hear back and if anything comes to fruition. I also spent a week and a half subbing as a teacher at a preschool, where I was called ‘Miss Lizard’ and got to read aloud picture books and paint with watercolors and rub the tiny backs of curly-haired children while they fell asleep at naptime, and catch them at the bottom of the slide, and hold their mittened hands, and that was very nice and also frequently hilarious.

It is also rather lovely to have so much free time. For example, it gives me lots of time to read, and take long hikes with friends, and go on spontaneous bar crawls, and attend birthday parties and plays, and visit faraway people, and have leisurely dinners with my parents, and build screech owl houses, and rake leaves.

Last week, I set off on Monday for a second interview at a large nature center north of Milwaukee. En route, I thought to myself, “I’ll be driving around a big chunk of the Lake Michigan shoreline already – why not drive the entire thing?” This is the great thing about having zero obligations – there was no reason why not.

So on Monday, I ran around barefoot on exceedingly windy beaches at both Warren Dunes and Indiana Dunes; drove through old brick-y neighborhoods in Gary, Indiana and East Chicago; stopped my car on the side of the road to snap pictures of the Chicago skyline (note to Mike, if he sees this – I think I once tried to argue that the Detroit skyline rivaled Chicago’s in beauty; I take it back); got stuck in Chicago traffic; and finally reached my bed-and-breakfast in rural Wisconsin in the total darkness of a cloudy night. I bought wine and cheese and grapes and spent some time on the large and comfy bed researching lichens pre-job-interview.

Tuesday was the job interview. It was four hours long, including a tour of the facilities and some of the trails, and at the risk of jinxing myself, I think it went well. I am becoming an expert at job applications and interviews these days. Perhaps I should put it on my resume?

After hiking around the Nature Center for a bit, I took a nap in my car on the outskirts of a truck stop parking lot. (I fit quite cozily in my backseat with my down comforter.)  Throughout this whole business, I had this grotesque cold that made me sleepy and foggy and mucusy, so naps were pretty important. And then I drove to Madison, for a spontaneous visit with the wise and calm Lauren Beriont. We had delicious beers, Nepalese food, and good conversation, and I liked Madison a lot in spite of the biting, icy wind. The next morning, with Lauren off to work, I walked around Lake Mendota, checked out the local food co-op, and blew my nose 7,000 times.

From there, I toodled back through rural Wisconsin (flat and full of dead, golden-gray cornstalks at this time of year) and then continued to make my way along Lake Michigan. At Port Washington, I walked out along a breakwall and got enthusiastically drenched by enormous waves that roared up sounding like tornadoes or freight trains or angry dragons and covered me from head-to-toe in spray that was not-quite-ice, which made me laugh, like a toddler playing in a sprinkler. (I dried out later, with the heat in my car on full-blast.) It was brilliant to see the lake from the other side; at one point, I was standing directly across from Nordhouse Dunes, my favorite place in the world. Everywhere, the colors were muted but magnificent: a subtly complex palette of grays and pastels. 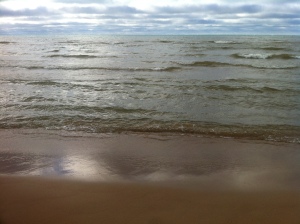 That night, Wednesday, I stayed with my friend Levi and his giant dog Loki at his aunt and uncle’s house in Manitowoc. (As it was rainy, and I’d been planning to stay in my tent that night, I was extremely grateful for the much better night of sleep I had.) I hadn’t seen Levi in almost a year, and we caught up at a small bar full of what were reportedly young dairy farmers, and then the next morning over breakfast. It was grand.

And on I went: there was an old lakeside wooden rollercoaster in Green Bay, spruce and pine-lined highways heading north, and hunters crowding into cozy state parks. I drove into the U.P., and it got dark early, so I found (just barely) my friend’s property east of Manistique in the dark, and set up my tent atop a sand dune with numb fingers. (I had a short debate with myself: set up the tent in the hollow between dunes, where I’d be protected from the inevitable wind, or atop a dune, where I’d wake up and stick my head out to see the lake stretching out before me? The view won.) I walked to the lake in my wool socks (it was a little too cold to be barefoot, but I couldn’t bear shoes between me and the sand) and then peeled the socks off and stood ankle-deep in the quieting waves. I couldn’t see anything; the clouds were so thick that there wasn’t even moonlight. The little waves over my feet were so cold that the pain almost became something pleasant: a sharp reawakening of every nerve. (Then, of course, they took forever to warm up after, and that was a pain in the butt. I’m always doing this to myself.)

I was warm all night, in my sleeping bag under a comforter, even though I could tell it was snowing and the wind was so strong that the tent fabric kept getting blown into my face. In the morning, I crawled out of my tent, and sure enough, the dunes were dusted in snow, and there was the lake, heavy gray and finally calm. I took down the tent and walked down to the beach again.

The cold I had was insatiable, though, and so I cut the circumnavigation short. After stopping at the beach along Highway 2, and crossing the Bridge, and somehow successfully undergoing a Skype job interview at a Starbucks in Mackinaw City for a position in Colorado, I decided to hightail it down I-75 instead of following the lake. This did enable me to stop by Lake Huron, and add a splash of that to the Great Lakes collection I’ve got going in a jar on my dashboard. (I had a surprisingly hard time finding the lake in the dark. Wandering around the woods, I came across what I thought was Huron, but quickly realized was a pond. Finally, after pushing my way through tall, crinkly prairie grasses, I came to the muddy beach, with tiny waves barely visible on another cloudy night.)

As you all know, I love Lake Michigan more than most people love any kind of non-human thing, and it was a delight and a privilege to see her from so many angles. So if this bout of free time continues, here’s to many more adventures!

One thought on “lake michigan from all directions”