Last weekend (which was a happy three days long) I drove up to Houghton, in Michigan’s Upper Peninsula. On the way home I decided, pretty spontaneously, to stop at the Apostle Islands National Lakeshore and hike to the rapidly-becoming-famous ice caves along the shore of Superior. It was snowing heavily but almost thirty degrees, and I joined the throngs: thousands of people penguining along the frozen lake to the beautiful rocky caves with their complicated collections of many-colored icicles. Those were to our right, as we headed out; to our left was flat, white frozen Lake Superior and the flat, white sky.

At one point I passed an older middle-aged couple who’d stopped to take a photo. The man shuffled forward in the snow and turned to face his bundled-up wife with the camera, all of that flat white emptiness rolling out behind him. She lifted the camera and he instructed her, “Get the vastness.”

It’s hard to think you could miss the vastness, but as I went on along the frozen lakeshore, I realized how easy it could be. Zoom in too far and you get that old familiar face and none of the wild, unbelievable, scary and beautiful big-ness of the world.

So take the wide view, I guess is what I’m saying here. Zoom out. Look at all of the possibilities. Get the vastness.

From the dark and snowy drive out, when I got lost in northern Wisconsin and received directions at a gas station from the sweetest little Wisconsin boy I’ve ever dreamed could exist (not that I frequently dream of sweet Wisconsin boys), to the ice caves field trip on the drive home, it was a vast and beautiful weekend. I cooked with Alina and Roper, spooned with Alina’s tiny pup, and swigged bourbon from the bottle. I skied at Bohemia and Ripley with the lovely Alina, went off the largest jump I’ve been off yet, and repeatedly took ridiculous falls right underneath the lift, prompting, of course, cheers from above. I took a sunny solo hike to some frozen waterfalls, occasionally sinking waist-deep in powdery snow, and I snuggled Levi’s puppy on his couch under a hanging bright afghan. I ran into new friends and old, met new friendly people, drank hot coffee, got an oil change (look at me, being productive), drank beers at KBC and elsewhere about town, and ate my first pickled egg (and it was hella delicious.) 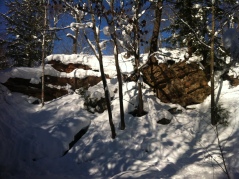 I got to spend a day with Forrest and Col, my very favorite 17-year-old twins. (Sort of a day. They are way better skiers than I, so we were not really together much of the time on the mountain, although Col was doing his best to be a patient teacher.) I’m sure they’d roll their eyes and groan heartily if they ever read this, but I have an enormous affection for those two goofy guys. They were like our little brothers on Isle Royale, where I spent three summers watching them go from the most adorably awkward 14-year-olds to chill and occasionally suave sixteen-year-olds who stole swigs from our glasses of whiskey. The day they left the island my last summer there, when I was going through some rather tough emotional turmoil, Forrest wrapped me up in a big bear hug and whispered in my ear; I don’t remember the exact sentence, just that it was something utterly comforting in its simplicity, like “Everything’s going to be all right.” They are wise youths.

I am loving the big storms this winter; the piles of snow; the icicles bigger than me; the powder days and the ice storms. For one thing, there is nothing that cures a hangover more effectively than strenuous activity in the cold. (For real, try it.) For another, what’s more satisfying than spending all day feeling vigorous and foolhardy in freezing temperatures, surrounded by blue ice and life surviving against all odds, and then going indoors at the end of the day to snuggle with a good friend or a pup and warm your belly with liquids?

So go out there. Get the vastness. 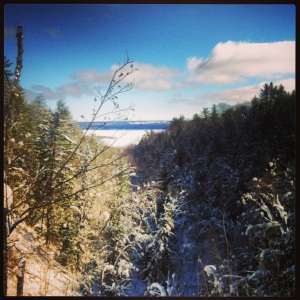 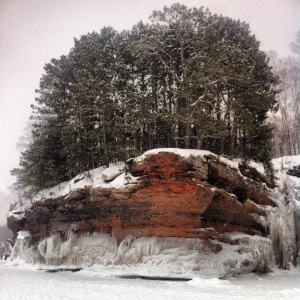 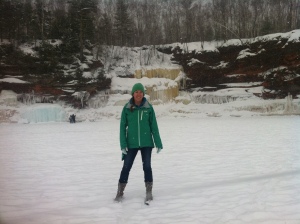