I have a good job.

Last week I saw my first kid fall into the shark tank.

We actually have three shark tanks: there is the “Pacific Reef Tank” along the Tropics Trail (which holds zebra sharks along with its tiny sea turtle and hundreds of brightly colored tropical fish), and in Discovery Bay, the “Atlantic Reef Tank” (with oceanic whitetips and sandtiger sharks, along with two medium-sized sea turtles and hundreds of large silver fish) and the “Estuary.” The Estuary holds several small rays, and three small species of shark, including leopard sharks. The Estuary is one of two “touch pools,” where people can feel the slippery backs of sharks or the stubbly surfaces of sea stars – which means all of the sharks and all of the rays (none of them, of course, a threat) spend all of their time just far enough below the surface so as to be out of the reach of a typical 4-12 year-old child.

So it was of course the Estuary that the girl fell into. Apparently, it happens all the time. Kids bend themselves over the glass barriers, bouldering up the rock walls, trying to get the elusive swipe of a shark’s back. I looked over just in time to see this girl – little girl, maybe six years old, super small – go in head-first. In seconds, her dad had hauled her out by her ankles. She was gasping for breath, wide-eyed, water streaming out of her blonde hair. A puddle formed around her, as did a small crowd of wide-eyed kids and concerned parents. A volunteer, in a blue shirt, produced a bath towel.

They had it under control, so I continued setting up for my overnight (later, I’d spend the night sleeping by those same sharks and rays, and fifty third to sixth graders.) I dumped my child-size shark costume in its plastic bin, checked with Dan about the lighting, and headed back towards the classroom to gather some sea urchins.

En route, I passed the little girl and her parents. She was wrapped in the towel now, hair clearly recently dried with the same, leaving a little trail of tank-water behind her. As I caught up to them in the busy hallway, I realized the girl was pausing to turn to every single group she passed. She’d look up with a broad grin and say, “I just fell into the shark tank, you know.” 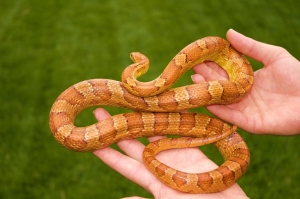 I love this! I love being privy to these moments of delight and wonder and pride. Yesterday I got to walk around with a corn snake and help more than thirty kids and adults have their first ever experience touching a snake. Today I introduced a bunch of eight-year-olds to genetics. Last week, a little boy on my guided tour arrived at the exhibit that includes the colobus monkeys, gasped, and cried, “They look just like my wise little grandpa!”

I still have my moments of ambivalence and uncertainty on the whole concept of zoos, but I do love these, these moments of opening eyes and broadened horizons.

One thought on “going in head-first”