(This is one of those throwback adventure stories I mentioned earlier.)

Almost a year ago, Niko and I planned an April 2017 trip out west. We invited some friends – Ty, Jen, and Carsten (people who’ve been the let’s-do-it spontaneous adventurers in my life for years) joined the team. (Past adventures with this crew include: Three-hour drives to see the stars over Lake Michigan, decided the afternoon thereof. $300 flights to Germany for spring break, purchased the week before. Backpacking trips in temps far below zero. Six months in New Zealand.)

We encountered various issues along the way, and I found myself doing a lot of googling throughout the process, reading people’s blogs for advice and insight into different parks and trails. Just as it’s useful for finding new recipes, or researching restaurants, or whatever, the Internet is also pretty handy for planning backcountry adventures. I’m a proponent of storytelling and advice sharing, whether it’s done around the campfire under the stars or over screens and comment sections.

Even though we submitted a permit request months ahead of time, the Grand Canyon backcountry permits were all gone. Flights into Vegas were by far the cheapest option, so I started clicking around in Google Maps, looking for swaths of pale green public land. Just west of the Grand Canyon, attached along its margin, was the Grand Canyon-Parashant National Monument. I did a Google image search, emailed the ranger station, searched for blogs about backpacking there. It looked remote and epic and beautiful, a topographical wonderland of canyons and peaks and washes. Also a paradise for ATVs and four-wheelers, but there are four big wilderness areas that don’t allow motorized travel. There are trailheads an hour and a half north of the McCarran International Airport. We bought our flights for Vegas and ordered a giant Arizona Strip map.

Over the next couple weeks, we zeroed in on a plan – the Paiute Wilderness, just off I-15. We could summit Mt Bangs and explore long, twisty canyons with potential hidden springs. The week before our trip, I checked in with the local ranger staff, who warned me that any rain would make the trip basically impossible – access to the wilderness means crossing the Virgin River on foot, and high waters would make it way too dangerous. But it’s the desert, right? Not too worried.

Obviously, you see where this is going.

Our flights were all Thursday night, with plans to car camp that night, spend the next three days backpacking, and crash in a fancy hotel in Vegas Sunday night before our flights home on Monday. On Thursday morning, I got an email from my new ranger buddy, Amber: Roads and river crossings were already closed. The northern sections of the river, in Zion National Park, had gotten rain. We should not attempt to cross it, and she recommended heading south.

Back to Google Maps. The five of us had a group text going throughout the day. Not only did we need a new Adventure Plan, we were also in the midst of the Delta Disaster of 2017; by early afternoon, even though we were converging on Vegas from four different airports, everyone’s flights already listed a delay.  The group text was getting really long.

And that’s how we wound up going to Death Valley.

I have to break the sad news first, before we get there – Carsten never made it to Nevada. Delta cancelled his flight at the last minute, somehow also sending his pack with camping gear across the country. He spent hours and hours in lines and on hold, all for naught. We’d spend the rest of the weekend having versions of “what would Carsten do” conversations and trying to use him as tiebreakers in debates.

I’ll fast forward to Death Valley now, zooming past our five hours in a shady casino hotel on the outskirts of Vegas after finding the Red Rock Campground completely full, past a bagel and coffee breakfast, past buying a map at REI, and $30 worth of water jugs. We drove the two hours west in our rented black SUV, through Pahrump, past a boarded-up, suspicious white castle.

Thanks to more internet research, we’d discovered the preferred backpacking route in DV – a 26-mile loop through Cottonwood and Marble Canyons. We checked in first at the Furnace Creek Visitor Center. We all kind of expected to have to prove our worth to the rangers, convince them to trust us with our own lives – but instead they gave us an “optional” backcountry permit to fill out, a paper map of the route, and a friendly ‘have fun.’ They also gave us some exceptionally good news – the mapped springs were flowing and dependable. We’d been steeling ourselves to carry 3-4 gallons of water per day – now all we had to bring was a starting supply and our water filters. Hell yeah. 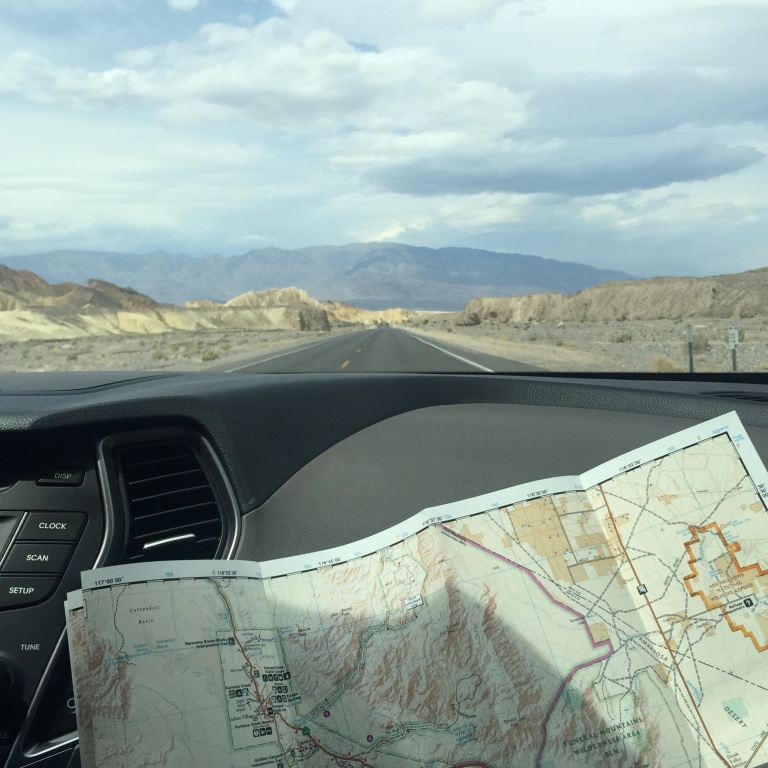 Whenever I’ve told people about backpacking in Death Valley, the reaction is universal: people cock their heads to one side, furrow their brow, say, “Really?” I can tell they’re picturing us slogging over an endless, flat expanse of cracked, salty mud, mirages hovering over the desolate surface. This was not the case. This 26-mile canyon loop is an oasis and a wonder.

The drive to the trailhead did take a long time: our SUV went from paved roads, to dirt, to a bumpy two-track half-covered in sand. The temperature gauge on the dashboard read well over 100 degrees. There were cacti everywhere, and sometimes we skidded out on turns, like driving in snow.

It’s hard to write about backpacking, sometimes. I sit down to capture it and the actual experience of being in the wilderness starts to feel too enormous. The flights there, the errands, the planning – that’s encapsulable. The days on the trail, however, start to feel like they’d require a novel. And especially eight months removed from it: my memories are technicolor but jumbled, multi-sensory but in no sensible order.

Still, I did write about it. And you can find that story in part two, later this week.

2 thoughts on “Death Valley, Part One: how to plan a backpacking trip on the fly”