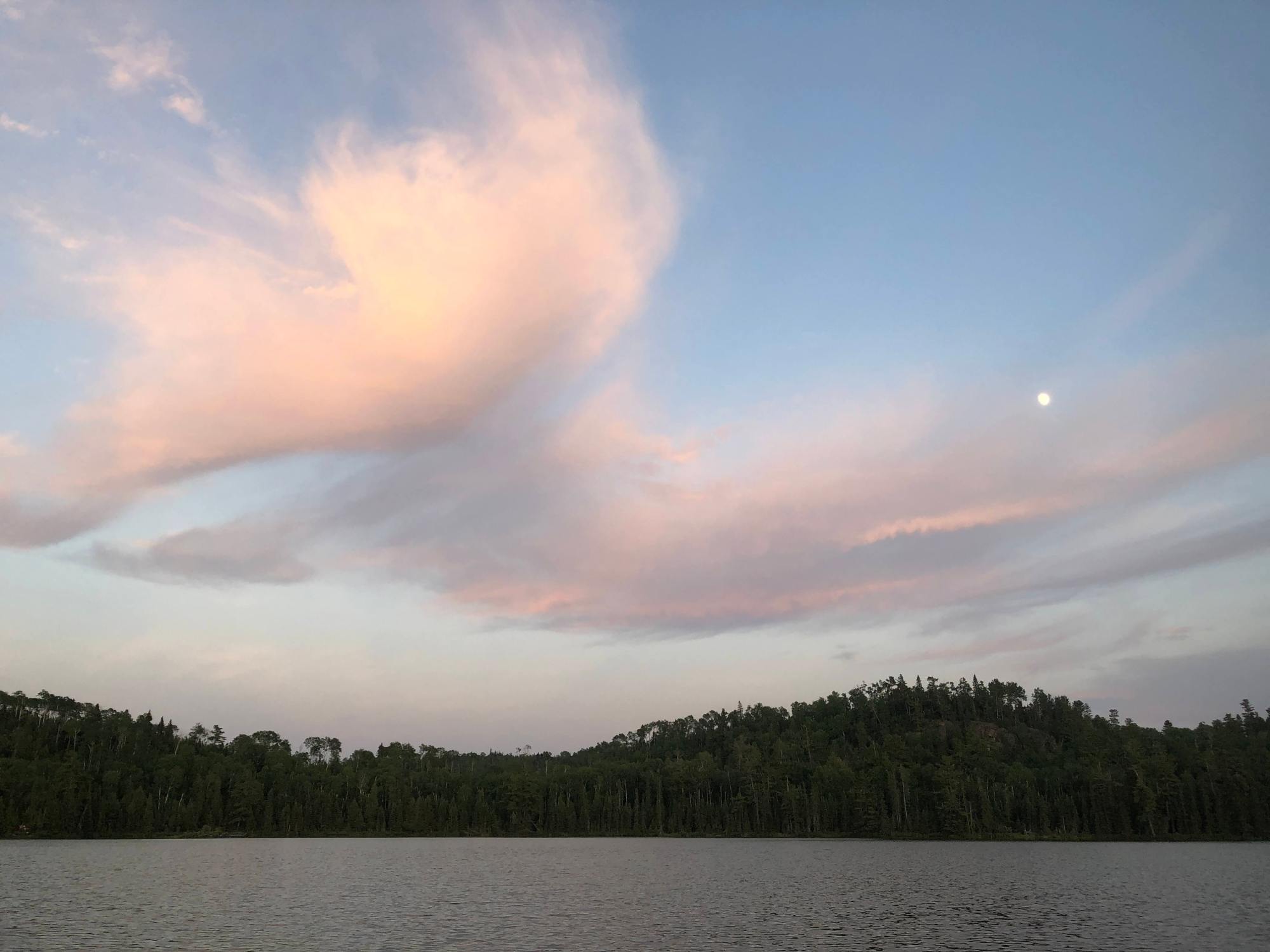 If you haven’t read the start of the journey yet, START HERE.

(All daily mileages are approximate estimates, and certainly underestimates. They do not include any spur trails, portage trail side-trips, wanderings-around to try to re-find the trail, etc.)

We ate instant oatmeal, drank our instant coffee, and hit the trail late – almost ten am. Quickly, it was clear it was only getting hotter. The sun was white, glaring, and simultaneously the air felt sodden with sickly moisture.

Most of the day was spent hiking through an area that had burned thirteen years ago. The spruce forest in the prime of its life retained a semblance of constant coolness – there was, at least, shade, and a perspiring blanket of moss underfoot. This miles-long stretch had lost the bulk of its trees. The first to colonize after a serious fire are fast-growing, weedy shrubs, who take advantage of the sudden sunshine and spread low and thick. And so we spent hours pressing our bodies through thickets of alders, growing so tightly packed it seemed like they were weaving themselves together into a net, something out of a horrific fairy tale. Sometimes there were thickets of honeysuckle or thimbleberry shrubs, which were moderately more easy to shove oneself through (and although it was still early, we found one or two ripe thimbleberries.) Occasionally there was a long, dense stretch of ferns almost as tall as I was, and pressing through them felt akin to swimming through a green pool. We liked the fern stretches.

We could see inches to either side of us. We picked our way along the uneven ground. Our arms and ankles were scratched and bitten. My hair was thick with leaves.

Once I saw a perfectly woven birds’ nest perched six inches from my face in the alders. We saw an enormous pileated woodpecker, very close, and startled a puffed-up mother grouse who startled us back.

There were occasional pockets that had clearly escaped the fire, and we always thought, “Oh my god, okay, this is it. We’re out of that hellscape and back in the shade.” For ten or fifteen minutes, we’d enjoy the delightful sensation of walking through fresh air, rather than hacking our way through a clogged nest of branches. And then suddenly, the tall trees would vanish again.

We stopped for a lunch break in one of these unburned oases, on the northeast corner of Loon Lake. I felt deeply exhausted – our packs were heavy, with lots of water and still most of our seven days of food – but mostly it was from keeping my balance on extremely uneven ground that was invisible underneath the vegetation. Also the constant sun exposure likely did not help. We sat on the ground, right in the middle of the trail, using our packs as backrests, and shoveled trail mix and tiny meat sticks into our mouths, hypothesizing about what the temperatures were. (Naturally, three minutes after we started hiking again, we passed a pair of crudely made, moss-grown wooden armchairs right on the lakeshore. For more than a mile, I dreamed about what it would be like to have sat in one. They had backs and everything.)

Later in the afternoon, we came to Bridal Veil Falls, a gorgeous, long strand of tiny falls in a rocky creek, with an old wooden bridge crossing. I tossed my pack and scrambled to the water with something like desperation, to scrub cold water on my face and arms. It wasn’t really cold enough – the little creek was cool but not cold, not enough to shock and clean my overheated skin. There were dried hulls of insect exoskeletons everywhere (mostly some kind of stonefly, I think – Plecoptera.) We ate more snacks and filtered water, filling up more liters for each of us – we’d been nearly out. Just before the falls, there’d been an astounding rocky cliff overlooking a sprawling forested view, and a patch of strange pink orchids.

The moment we got to the site at Topper’s Lake, we again threw our packs, immediately stripped, and dove into the lake. I scrubbed at the layers of sweat and pine needles and alder leaves and grime on my skin.

We set up camp – even those motions left us slicked with sweat again, it was so humid. The site was grassy up top, with the view of the lake from the tent pads mostly blocked by trees. Low creeping juniper bushes merged with the basalt along the lakeshore. A merganser swam by with eight perfect chicks, and I saw a frog who still had a bit of a tail, who hid himself in the mud when he noticed me. We finished the small last of Heather’s vodka and lime supply. Now in the wilderness area, there was no sound of motors, and we realized we hadn’t seen or heard a single other human being all day – there’d been no more road crossings with distant cars, no fishing boats. Certainly not any other hikers.

We each found at least one tick on us before bed, and we’d find a few more the next morning. The only campsite we stayed at that was grassy, it was the only one where we had any kind of tick issue, and I referred to it in my head as “Ticky Toppers” thereafter.

I didn’t sleep terribly well – it was too muggy and hot. The lightweight down hoodie I’d brought, back when I was imagining evening temps in the fifties, was a joke, but at least it made a nice pillow. Something that sounded heavy and awkward crunched by the tent in the darkest hours of the early morning, unsettling me.

We started the day’s hike, again, late and already glowing with sweat that would never evaporate in the soupy air. But the hiking was better. We were out of the burn zone and the trail was in slightly better shape, traversing either the spruced forest or dark, lumpy cedar swamps. Once we saw a perfect, plump, pink ladyslipper. There were a lot of steep sections but that meant a lot of jaw-dropping vistas, green as far as the eye could see, strange rock formations and glittering, slender lakes far below. We timed snack breaks for these vistas, when we could burst out into the open air from the trees and eat and drink in the slight breeze.

At one of these snack breaks, looking down on one such incredible vista, I touched something tender and vaguely painful on the back of my shoulder and asked Heather to look at it. “Is there something here? It feels weird.” “Oh yeah,” she said. “It does look weird. It’s kind of purple.” She took a photo on my phone so I could see it too. It was a slightly raised, gray-purple blob about a centimeter across, surrounded by a ring of flat bright pink skin. We decided to keep an eye on it.

Sometime thereafter, we reached the falls at Staircase Portage – and there were what felt like hordes of people there. They were two or three different parties of paddlers who’d day-hiked up to the falls from the beach where they’d left their canoes, and as a result smelled much better than us, like sunscreen and clean laundry, and were wearing bathing suits and carrying binoculars and water bottles and not much else. It felt disorienting, like we’d emerged from a wilderness in which we were the only residents and popped right into a crowded beach party, even though there were only maybe ten people around. There was a confusing intersection of several small trails – some heading down to the lake portages, some heading to the waterfall viewing area, one ours, the Border Route. There was a split-wood fence and some constructed stairs. “Where did you guys come from?” I asked the first person I saw, a girl who was maybe fourteen years old. I was, I can recognize now, likely extremely dehydrated and a little delirious. She looked at me like I was wild and dangerous, said, “Up the trail,” and hurried off.

Heather and I left our packs at the top, pulled out the squeeze water filter (we also had a gravity filter for when we made camp every day), and hurried down the broad, beautiful trail to the water. It was just mindboggingly beautiful, a wonderland of rapids and boulders and moss, with one enormous falls that then kept falling and churning for hundreds of feet to the lake far below. Like I’d done at Bridal Veil Falls the day before, I squatted over the water and splashed it over my face and head and arms and legs in some desperation, and it still wasn’t quite cold enough. We filtered another liter and a half each – we’d just run out of our water supply, timing it for this water crossing marked on our map. I drank half a liter and filled it back up again.

Starting to feel a bit saner, I crawled around the enormous boulders for awhile, taking pictures and reveling in the mist coming off the water. We chatted briefly with two friendly young men in bathing suits. Eventually, we pulled ourselves away.

We passed the Rose Lake West site first, which looked a little dismal, clogged with fallen trees and not on the water, but the Rose Lake East site, our final destination for the day, was nicer, although it was also criss-crossed with fallen trees that blocked the view of the lake from the tent pads and cooking area. (The Border Route Trail and its campsites get far less maintenance, including clearing and cutting of deadfall, than the paddling sites and portage trails. Every portage trail we crossed or overlapped with on the trek felt like a pristine super-highway – relatively wide, well-graded, free of obstacles – although even those trails would be called rugged and tough by many.) Rose Lake itself was stunning and expansive, with tall cliffs along one shore. In our now-normal routine, we went swimming before doing anything else. It took a long time in the water before I started feeling less cooked through, less like a baked potato and more like a human again.

Dinner that night was delicious – instant ramen that Heather doctored up with eggs she’d carried in from her and Drayton’s chickens back in our neighborhood, chili sauce, sprinklings of sesame seeds. We put in extra seasoning packets and flourished in the salt. We ate our overflowing bowls down by the water. The air was thick with hunting dragonflies at first, and later we noticed hundreds, maybe thousands, of some kind of aquatic insect – maybe fishflies? stoneflies? – flying up, then down, then up, then down, in perfectly, oddly, straight routes. Another merganser swam slowly by. The sunset was orange, the lake was glassy. I waded around on the rocky bottom for a few minutes, before we left the flies and mosquitos and retreated to our tent and our blissfully soft double sleeping pad to companionably read side by side. (I read James Baldwin’s Another Country that trip, which pulled me from the Boundary Waters to New York City and also, back to Minneapolis, where our police force had just murdered another innocent Black man, George Floyd, a month before.)

Keep traveling: Read about Day 4 here, Day 5 here and Days 6 & 7 (plus our tips if you plan to hike the trail yourself) here!