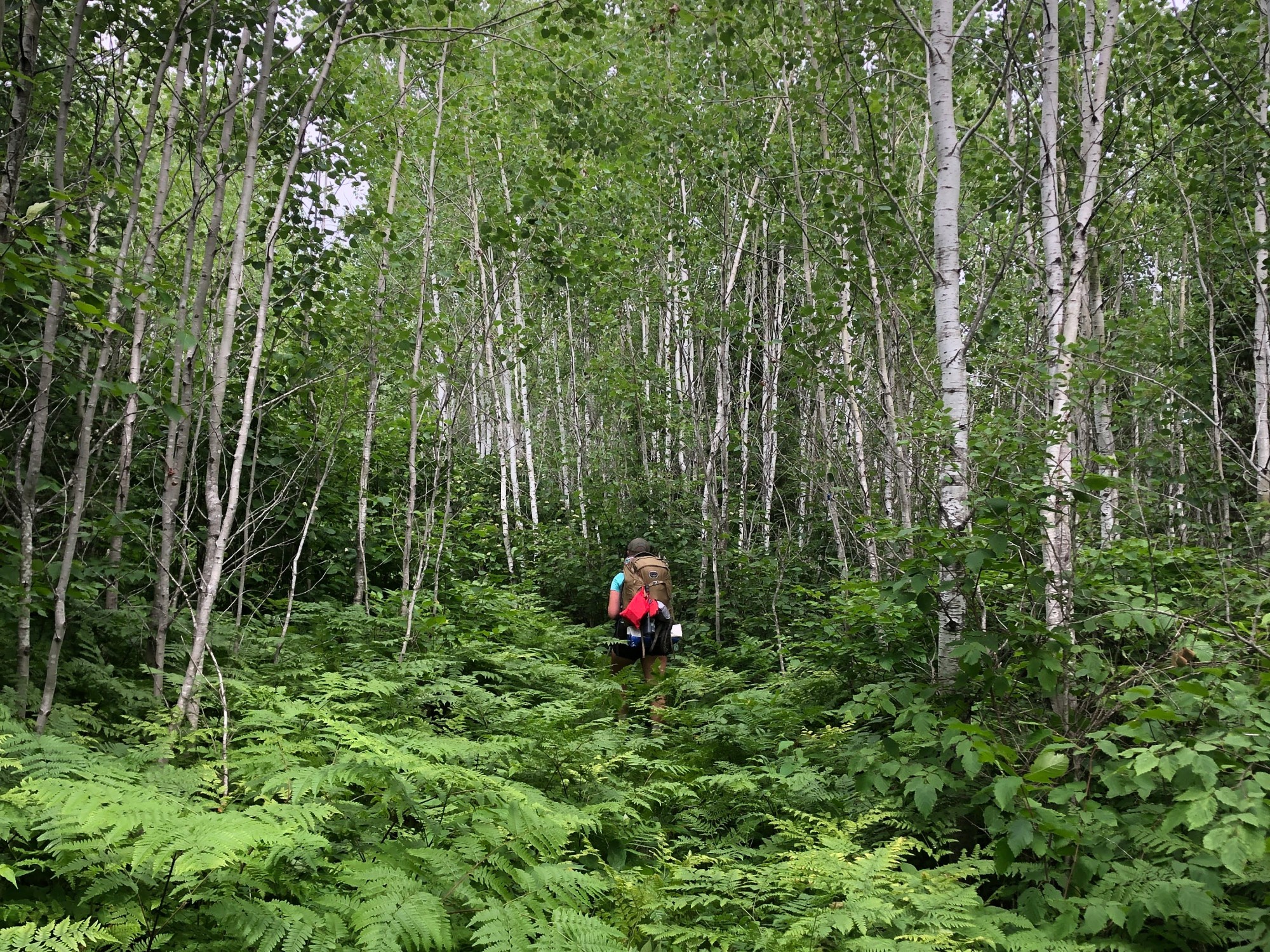 Expedition: a journey or voyage undertaken by a group of people with a particular purpose. Heather and I were the group, and the purpose was to thru-hike something. We started, a year ago or so, with lots of ideas, eventually winnowed to one – the Sunshine Coast Trail in British Columbia. It’s 111 miles of trail northwest of Vancouver, curling along inlets from peaked hut to hut.

On March 4, we purchased tickets for a mid-May adventure. Over the next week, COVID went from something on the news to something in the neighborhood, and on March 12, everything shut down. We were hopeful, for a time, that it would blow over quickly, but by the end of March, with borders closed and everything getting worse instead of better, it was clear that our Canadian adventure was not be. We got an email; our flights had been automatically cancelled and refunded to us.

But by mid-May, we had hope again. No out-of-state traveling, maybe, but there were still things to thru-hike closer to home. Like the Border Route Trail! It was even almost in Canada, tracing the curves where Minnesota and Ontario take turns being little spoon.

The Border Route Trail is 65 miles long. It was planned in the early 1970s by the Minnesota Rovers, a club of enthusiastic hikers, and built in the 70s almost entirely by volunteers, with some support from the MN DNR and the Forest Service. The whole thing traverses boreal forests, thick with moss and amoeba-shaped lakes, and the middle chunk of it weaves through the Boundary Waters Canoe Area Wilderness. It was constructed to take advantage of as many views as possible, meaning it darts up and down steep ridgelines and peaks whenever it can, typically taking the steepest, most direct way possible. The trail website calls it “rugged and primitive.” The most recent review on AllTrails says, “You must be incredibly stupid or stubborn to complete this entire trail.”

On June 29th, we re-packed all of our food, double checked our gear, and drove up from Minneapolis. We camped at the Trail’s End Campground that night at the far end of the Gunflint Trail, in a gorgeous site overlooking a wiggly inlet of Seagull Lake. We drank lukewarm beers and watched the sunset for as long as we could abide the mosquitoes. The adventure began in the morning.

(All daily mileages are approximate estimates, and certainly underestimates. They do not include any spur trails, portage trail side-trips, wanderings-around to try to re-find the trail, etc.)

The morning was gray, cloudy, eerie. After breakfast, we gave away our extra hotdogs to the neighboring campers and drove to the parking lot at the West Trailhead. The first couple miles gave us fern-speckled trails, Indian paintbrush and buttercup underfoot, long foggy bog vistas, and the towering slab of Magnetic Rock. Inauspiciously, within the first half an hour, my boot slid off a wet branch on the trail and into a pit of mucky quicksand up nearly to the knee – I had to slid my pack off and use every muscle fiber I had to yank myself free. Heather helped. We saw a live toad, a dead vole, a rabbit.

Then we were into densely-tree lined cross-country ski trails, broad but overgrown with tall grasses and asters. The trail edges were knotted walls of alders and honeysuckle, and the mosquitos were thick and incessant. Sometimes the trail deviated from the old ski trails and became a whispered suggestion through the forest, marked by sporadic tics of blue tape tied to the branches of shrubs. I had a GPS app on my phone that saved us twice at squirrely, unmarked intersections, as we waded through an avalanche of ferns. Sometimes we just went the way it felt like some human had moved before. We ate our lunch snacks sitting in bee-buzzing wildflowers by the side of a gravel road crossing, the sun-lit opening slightly less buggy than the shady woods.

It was warmer and muggier than we’d expected, we both agreed. Before coming, we’d looked up the weather forecast for Grand Marais, the closest town we knew the name of – it had promised delightful highs in the seventies and lows in the fifties, perfect backpacking weather. It was just now beginning to occur to us that Grand Marais was right on Lake Superior, a natural fridge, and we were 60+ miles inland, insulated and surrounded by swampy bogs.

We made it to Loon Lake by about 2 pm – too early to stop, it seemed like, but the next campsite was over 10 miles away – and we were drenched in sweat and there was the lake like a cold blue gem. The campsite was beautiful, perched on a long slab of basalt sliding into the lake, tiny jack pines everywhere. As soon as we hit the deserted campsite (we’d yet to see another person, wouldn’t for awhile yet), we dumped our packs, took off our damp boots and everything else, and dove naked into the lake – cool, but not icy, with an algae-slick rocky bottom and that thickly tree-lined shore. Refreshed, we set up the tent; Heather’s hammock; our kitchen gear around the firepit. We read for hours in the sun, the mosquitos gone in the breeze by the water, with breaks for dinner and another swim and the occasional burst of conversation. There was an odd fishing boat motoring past at a distance – we weren’t yet in the wilderness area where motors are prohibited. Heather, that wizard, conjured amazing post-dinner cocktails out of a combination of plastic bottles. When we eventually crawled into our tent, it was only just beginning to go dark outside, and we fell asleep to loon calls.